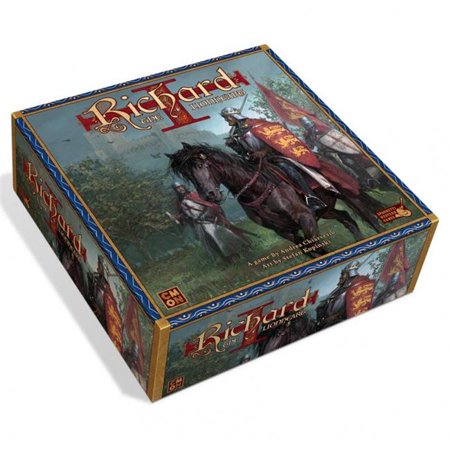 While the king is away, the prince will play. The crusades have summoned richard the lionheart to the middle east. Back home in england, john lackland is trying to consolidate his power, recruiting the sheriff of nottingham to his side. Opposing them is robin hood and his band of merry men. What will be left of richards kingdom when the crusades are over. In richard the lionheart, players ally themselves either with robin hood or john lackland. They travel across england, trying to earn prestige points and influence the crusades from afar. At the end of the game, richard will return to whats left of his kingdom if he returns at all. The player who has earned the most prestige is declared the winner. Features16 Highly detailed plastic miniatures10 Character dashboards240 Influence cardsEngland boardCrusade boardReserve board15 Edict cards18 Event of the crusade cards6 Player aid cards7 Faction skill tokensFirst player token1 Game round token6 Ship tokens60 Coins60 Prestige point tokens6 House tokensRulebookSp

Be the first to review “Richard The Lionheart” Cancel reply