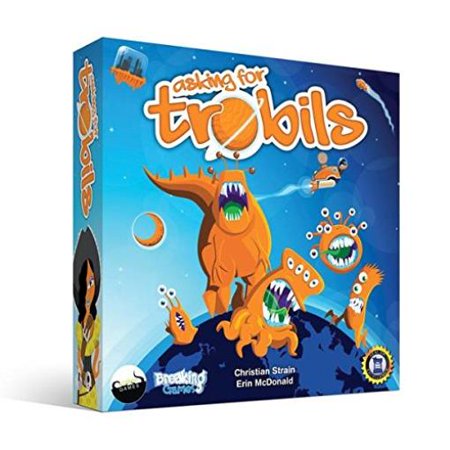 Asking for Trobils is a worker-placement boardgame where the player is trying their best to rid the star system of Trobils (space pests). You play a Trobil Hunter – flinging the space vermin into the star, and dealing with unsavory folk just to get the job done. Players start with one ship, placing it at various locations to gather resources that will allow you to trap Trobils. But just one ship may not be enough, so you can fly through a wormhole to create two or even three ships to help you gather resources. You can make connections to gain more resources or hang around the local Riffraff. Send pirates, bounty hunters, or gangsters out to make areas rougher for your opponents, or enhance locations for everyone by sending out traders and courtesans. For every Trobil card you capture, you gain victory points. The player with the most points at the end wins! var _mtm = _mtm []; _mtm.push({‘mtm.startTime’: (new Date().getTime()), ‘event’: ‘mtm.Start’}); var d=document, g=d.createElement(‘script’), s=d.getE

Be the first to review “Asking For Trobils” Cancel reply